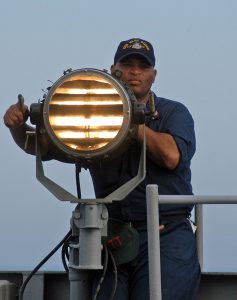 The idea of using flashes of light to signal a message isn’t quite new (see picture), but like with any technology, there’s always people trying to take it to the next level. The Dutch Telecom Agency has recently indicated that LiFi could become a useful supplement to existing WiFi technology.

So, do we really need an alternative to WiFi? After all, WiFi is a pretty popular way to connect to the net. It’s working well and as time passes, it’s only getting quicker and more secure. Unless, maybe, you live in a crowded apartment block in the big city and your neighbours’ routers are drowning out your signal… There’s only so many WiFi channels to choose from, and for some of us, that’s becoming a real problem.

Okay then, what is LiFi? The idea is to use a small light or laser and turn it on and off extremely rapidly to transmit a signal. This technology has achieved speeds of up to 1 Gigabit/s, at least in the lab. For LiFi to work, you will need a direct line of sight. Unlike a WiFi signal, light will not pass through walls or other obstacles. You could even consider that an advantage, if you don’t like the idea of people standing outside your home or office, listening in on your communications.

If you’re worried about protecting your data, though, it’s not all good news… Of course hackers have been thinking about ways to exploit similar concepts. For instance: even if you disconnected your computer, holding all your secrets, from the net, the bad guys could still steal data from it. If they somehow manage to infect your machine with malware, maybe carried on an USB stick, they could make your hard drive led flash on and off, or even blink the leds on your connected printer to send out information. Then they’d just have to launch a camera drone and have it hover outside your window, ready to capture your files.

Will LiFi really catch on? Time will tell!