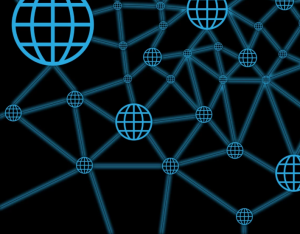 The Internet: from a decentral beginning…

From its earliest days, the Internet was designed as a decentralised network: instead of requiring all communication to go through one central piece of hardware, the Internet allowed all kinds of networks and computers to connect to each other as and when they saw fit. More importantly, the Internet was envisioned as a tool for humans to connect, work together and share information over long distances. People were even seeing this new network as a force of liberation, a carrier of free speech. Because of its decentral nature, no one organisation would be able to control it and governments would no longer be able to suppress information.

…into the hands of companies and governments

So, what happened? (Apart from the fact that we seem to be more interested in sharing funny cat videos than in exchanging grand ideas…) Despite its decentral nature. some hosts on the Internet are more equal than others. Most popular network applications are based on the client-server model. We, the clients, contact a server to request a service: please show me this website, or please send out this mail for me. At first that didn’t seem much of a problem, since anyone could (and still can) set up a server if they desire.

Over time, however, it turned out that we like to spend most of our time on the Web visiting the same servers over and over. These servers are concentrated in the hands of a few large companies like Google, Apple, Facebook or Amazon. These companies thus became central points on the Web, watching our every move online and gathering information about us. You may thrust some of these companies to do the right thing, but at the end of the day they need to make money. Their dominant presence puts them in an ideal position to abuse our data, censor the Internet or just hide all information from us that, according to some algorithm, won’t make us click an ad. Since we are spending so much of our time online on these few big sites, it’s also become easy for governments to eavesdrop on us or just block these sites when they don’t agree with what’s being discussed.

A group of network engineers is working to take back control, building a truly Decentralised Web, or DWEB. They want to build new applications, based on Peer2Peer technology: no longer needing a central server, a group of people can come together and share their resources at any time, much like the Internet was intended to be. You’re surely familiar with BitTorrent, the protocol used for sharing files amongst a group of peers. You could consider BitCoin to be a technology to decentralise finance. What if you could use similar technology to store your files in the cloud? Copies of your files would no longer be saved on Google Drive or with Dropbox, but instead be copied to a large number of other machines while you, in turn, would be storing some of their data. Could Peer2Peer technology eventually replace Twitter, Facebook and Youtube? Could it allow us to shop online?

The DWEB isn’t quite finished yet, but it could turn out to be a major new approach to how we use the Internet. You can find two excellent articles about it on the sites of the Guardian and the Daily Dot, making for today’s recommended reading.

1 thought on “Building the DWEB”