With much of the world still suffering the effects of the Coronavirus, many of us are hoping for a vaccin or cure to be found. With many suggestions being looked at, from swallowing cleaning agent (sorry Donald: not helpful!) to utilising Llamas (not as crazy as you may think!), a breakthrough may happen, but experts caution us it may take years for an effective vaccin to become available.

Meanwhile, contact tracing apps promise us a different road out of lockdown. What is contact tracing, what technology would an app use to do this, and what are some of the privacy concerns involved? Read more in this article, where we look at a number of different ways to make this happen.

What is contact tracing and why do we need an app?

Suppose you discover you’ve been infected by the Coronavirus. In the days before noticing any symptoms of the infection, you might have gone around, possibly infecting other people you’ve been in contact with. Contact tracing involves finding out who these people are that you’ve been in touch with, and notifying them so they can take appropriate measures. If they self-quarantaine, that will stop them from in turn infecting others, thus putting a stop to the spread of the virus.

Contact tracing has been common practice for health organisations worldwide in dealing with other transmittable diseases, but with the sheer number of Coronavirus infections now spreading worldwide, it’s become simply impossible to have healthcare workers keep track manually. That’s where an app would help, being able to automate the process.

The basic idea is that most of us are in the habit of carrying our phones around, wherever we go. By keeping track of where your phone is, and what other phones are in the vicinity, we can get a pretty good picture of where you are, and who has been near you. Suppose you do notice you’re infected, now all we need to do is send out a warning to the other phones that have been close to yours, alerting their owners.

While this may sound useful, it will also raise some red flags for those of us that are concerned about our privacy. For a contact tracing app to work, it’s implied your location needs to be monitored constantly. For instance, a phone might continously share its location data to be stored in a central database. Who would own such a database? Presumably, that would be a government, and what else would they be entitled to do with that data?

Different countries will take different decisions on how much is acceptable in the fight agains the virus, depending on their cultural and political background. For example, India has created a contact tracing app and made it mandatory to use for government and private sector employees. China has also created their own app. You can’t really avoid using this if you want to leave the house, but to further promote it, the Chinese government has also used their influence to include the code into two of China’s most popular apps: WeChat and AliPay.

In some other countries, it’s more difficult to imagine a government being able to force the use of an app on its population. In those cases. apps need to be carefully designed with privacy in mind, so that large parts of the population will be willing to download and use such an app. It’s important to keep in mind that contact tracing can only be really succesful, if large groups of people participate. Experts estimate that over 55% of the population, equating over 80% of smartphone users, would need to adopt such an app for it to make a difference. With numbers like these, creating an app that people won’t accept, just won’t do…

Privacy is not the only challenge that an app would face. What technology can we use to reliably determine our location, and who’ve been in contact with? If someone becomes infected, we want to make sure not to miss anyone they may have spread the virus to. On the other hand, if we’re contantly being bombarded with false positives or warnings about people we’ve never met, that will most certainly discourage use of the app. So far, I’ve seen three approaches:

As stated before, large amounts of people will need to use a contact tracing app for it to have an impact. That’s why rivals Apple and Google took the unprecedented step of working together to create an API that national contact tracing apps could use. Work on the API is ongoing, and eventually Apple and Google are planning to include the software in their phone’s operating systems, to reach the largest possible amount of people.

The Apple and Google initiative will rely on the use of Bluetooth to identify who’s been near who. Privacy is a big consideration in their design: phones will transmit random, changing Bluetooth identifier codes, that cannot be traced back to your personal identity. Their documentation shows how this will work: 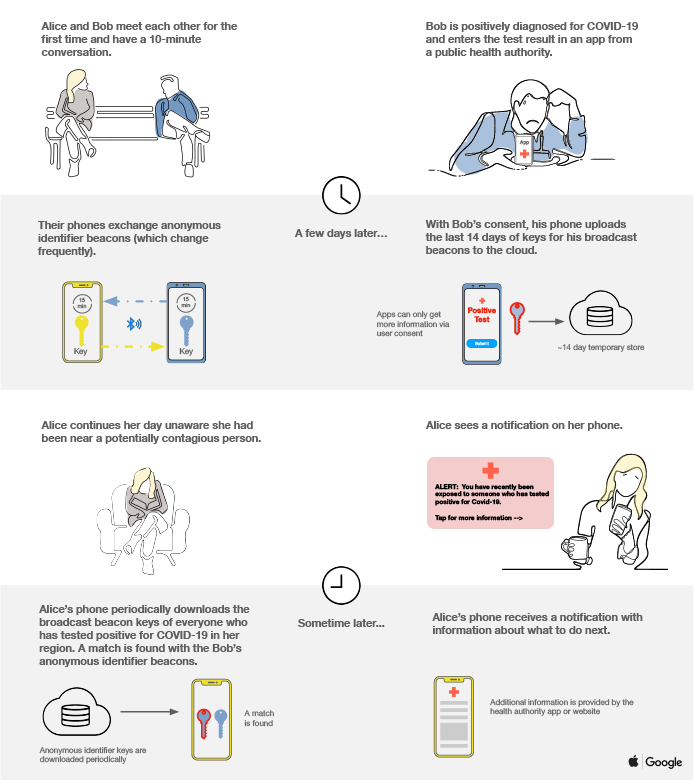 As you can see, contact tracing apps hold a big promise to help ease lockdowns during the Coronavirus pandemic, but are not an easy way out. There are some though questions about technology and privacy that need to be answered first. Would you use such an app to remain healthy, even if that meant losing some of your privacy? Let us know in the comments below!