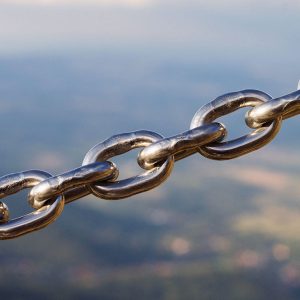 It seems that everybody is buying Bitcoins and planning to make – or lose – lots of money. Will we all be paying with Bitcoins (or other cryptocurrencies) in 5 years time? It’s hard to tell… However, the technology underlying Bitcoin holds the promise to change our world even more: we’re talking about the Blockchain.

The Blockchain is really just a record of transactions. So what makes the Blockchain so revolutionary? Traditionally, such records would be stored at a central location. For example, you would trust your bank to keep track of the amounts of money flowing into and out of your account. With Blockchain technology however, these records are stored in the cloud by millions of computers at once. This makes information transparent: no longer controlled by a single person, transactions can be checked by all. This property also makes it hard to commit fraud. A single bookkeeper can easily changes some numbers and slip a little money into his own pockets. Using Blockchain, all nodes keep checking the validity of the data with each other and it’s very hard to fool them all (or at least a majority of them).

Apart from digital currencies, in what other ways could the Blockchain begin to impact us?

Buying a used car involves spending a lot of money and then hoping it doesn’t break down as soon as you drive away from the lot. You’ll want to know if the car has been properly maintained and if the mileage has not been tampered with. Unfortunately, rumor has it that some used car salesmen can be less than truthful… Porsche is working to implement Blockchain in cars. Not only would this be a perfect way to record a car’s maintenance history, but it could also be be used to grant someone else access to your ride for a period of time or even to pay for electricity at your charging station.

Talking about electric cars: they run on batteries and manufacture of those batteries requires different types of minerals. One of those minerals is cobalt, mostly mined in the Democratic Republic of Congo. This does not always happen under the best of circumstances: some mines are suspected to make use of child labour. BMW has started a pilot with Blockchain to record the source of the minerals they use. In this way they’d be able to prove they only use “clean” materials, sourced from regulated mines that do not make use of child labour.

Even at the best of times, becoming intimate with another person can be a delicate dance. Now, in the days of #metoo, thing have only become more complicated. Are we really sure we want to do this? Is this about attraction and not about power, influence, or being afraid to make the other feel bad? It may seem good now, but what will happen afterwards? Did we respect each other’s boundaries or were they violated? To avoid any misunderstandings: why not take a few moments before undressing to record your consent to the Blockchain? Apart from the fact that starting up an app might not help to get in the mood for romance, there are some more reasons to question whether this really is a great idea…

Finally, the Blockchain has even become a tool for some people to record short messages or pieces of art for posterity. It will be exciting to see, what other applications will be dreamed of in the future!

1 thought on “Blockchain Beyond Bitcoin”