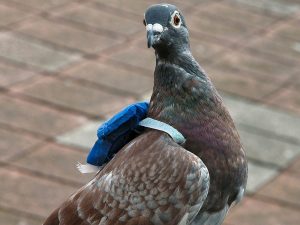 One of the beautiful things about the Internet is that it works, no matter what system or technology you’re using to connect. There’s even an official Internet standard, as specified in RFC 1149, for communication over Avian Carriers. That’s pigeons, and yes, it was an April’s fools joke.

Does that sound crazy? In 2009, Australia’s TV program Hungry Beast organised a race to see what’s the fastest way to get 700 Megabytes of data across Australia. Margaret the pigeon, carrying the data on a SD card, was faster -a lot faster- than uploading the file over the Internet. Similar experiments have taken place in other places, with pigeons beating technology.

Now it may be premature to cancel your Internet subscription and set up a pigeon roost in your yard, but there is something to this idea: if you have LOTS of data to transfer, there may be better ways to do this than over the

Internet. Even Amazon have picked up on this and have taken the idea to the extreme: the Amazon snowmobile is a truck crammed full of storage. You can rent it to transfer petabytes of data from your data center across the country.